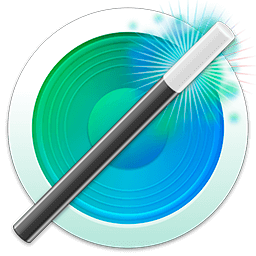 SounceSource lets you adjust your input, output, and sound-effects devices and volume settings in mere moments, right from the menu bar. Enable soft play-thru of input devices to your desired output, so you can hear sound coming in through any microphone or other source. With SoundSource, you get fast access to your Mac's most important audio settings.

Instant Audio-Device Switching - With just two clicks, you can switch the audio devices your Mac is using for input, output, and even sound effects.
Fast Volume Control - SoundSource provides easy access to the volume controls for your audio devices as well.
Audio Play-Thru, Too - SoundSource's Play-Thru window makes it easy to monitor the audio coming from any input device.
Comprehensive - SoundSource gives you one place to go for all Mac's most important audio controls.
At Your Fingertips - With SoundSource running in your menu bar, your audio controls are always available.
Lightweight - When you don't need SoundSource, it stays out of your way.

FUNDAMENTAL FEATURES
Magic Boost
Turn on Magic Boost to boost quiet audio so you can hear it, while louder audio is left untouched. Get richer, fuller sound from any source.

System-Wide Audio Effects
Apply effects to sweeten the sound of all audio on your system, with the built-in 10 band equalizer and support for advanced Audio Unit plugins.

Per-App Volume Control
Adjust volume levels for each of your applications, all in one place. Make one app louder or softer than others, or even mute it entirely.

Per-App Output Redirection
Control exactly where audio plays. Route music from one app to your best speakers, while everything else is heard via your Mac's built-in output.

Per-App Audio Effects
Use the built-in 10 band equalizer and support for Audio Units to sweeten the sound of individual apps.

Super Volume Keys
HDMI devices, DisplayPort monitors, and many other audio outputs fail to support the volume keys found on Mac keyboards. SoundSource makes those keys work with any outputs you have.

Customizable EQ Presets
When you get the exact right setting on the built-in EQ, you can save it for future use.

Menu Bar Access
SoundSource lives right in your menu bar, for fast and easy access to all your essential audio controls.

Global Keyboard Access
Set a keyboard shortcut to pull SoundSource forward, so you can control the app without even clicking the menu bar.