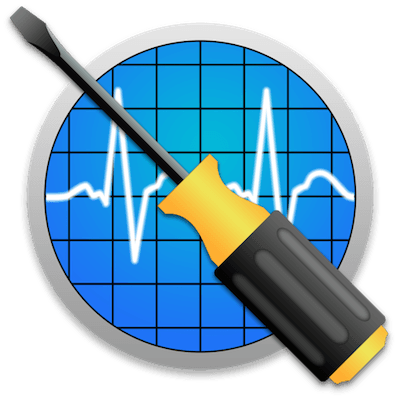 The new Techtool Pro 8 is the most robust hardware diagnostic tool available for Macintosh. Easy to use for both home users and professionals, TechTool Pro utilizes full 64-bit compatibility to keep your Mac running at its best. TechTool Pro 8 brings with it some of the deepest hardware testing yet - testing components on your motherboard that no other utility can access. You can now test the sensors and fans on your Mac, along with the battery if you're using a Mac laptop. In addition, we've now integrated Protogo, so that you can create your own custom test drives for out in the field.

Sensors
TechTool Pro already tests the major components on your motherboard: RAM, Processor, Cache, etc. In TechTool Pro 8, we're taking it a step further, testing a wider variety of components on your Mac's motherboard. On some machines there are more than 100 electrical and temperature sensors that TechTool Pro will check. If any of those sensors report values outside of their acceptable operating range, the new Sensors test will let you know so that you can take the necessary steps to prevent a minor problem from becoming a major one.

Fans
If you've ever used a laptop for an extended period of time, you might have noticed that your Mac's palm rests can double as hand warmers. Every computer generates heat, and almost all of them use fans to cool themselves when components become too hot. It's important to make sure that all the fans in your computer are functional. The new Fans test spins up the fans in your Mac to make sure that they at capacity and speed to ensure your Macintosh is running at its best.

Battery
MacBook models have one important feature that separates them from their desktop cousins - the battery. TechTool Pro now makes it easy to check on the health of that battery. The test reports cycle count, percent of total capacity remaining, along with the battery's overall condition so that you can use your Mac unplugged with confidence.

You can now take it with you
The portability of TechTool Pro is now included with every copy of TechTool Pro. TechTool Protogo allows you to create a bootable diagnostic device that contains TechTool Pro and all of its most powerful tools as well as any of your own utilities you may wish to install. You can then use this device to boot, check, maintain, and repair Macintosh computers as needed. Simply launch Protogo, choose Protogo from the Mode menu, and use it to set up a diagnostic disk.

Mac Drive Testing and Repair
Your Mac's hard drive, even if it is a Solid State Drive, is more likely to experience problems than any other component on your Mac. Because data changes so frequently, it can sometimes get scrambled. So, it's important to be able to test drives for problems and then repair them. Sadly, if something is physically wrong with the drive, it will need to be backed up and replaced, but the sooner this type of damage is detected, the fewer files - like cherished memories and important personal documents - will be lost. Most drive problems, however, result from data being in the wrong place, and can be repaired using Techtool Pro’s Volume Rebuild tool.

Emergency Startup Disk
If your startup disk stops working, and you need another startup disk, Techtool Pro’s eDrive steps in to help. The eDrive is what you’ll use to test, rebuild or defragment your main hard drive, but it is really helpful if your main startup disk goes missing. Instead of fumbling for your install DVD, or relying on the Recovery HD’s limited functionality, the eDrive gives you quick access to Techtool Pro along with several handy Apple utilities. You can even add other programs if you like.

Protect Important Data
The best way to prevent data loss is to be prepared. In addition to a backup, Techtool Pro includes Techtool Protection, which keeps an eye on your trash, allowing you to undelete that file you didn’t mean to delete. You can also back up your directory structures, the ‘map’ of where your data lives, so that if you need to recover data from a corrupt drive, Techtool Pro’s Data Recovery tool will know exactly where to look. Better yet, use Techtool Pro’s Volume Cloning tool to create an additional backup.