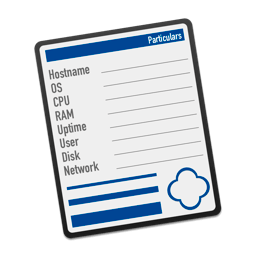 Particulars displays system information about your Mac. It shows computer name, model name, serial number, CPU, RAM, GPU, OS version, Server version, current user, uptime, disk space, and network configuration. It can be used in 3 modes: on your desktop, as a Today Extension, or at the command line.

Particulars does not replace your desktop background image and is responsive to changes in your screen or space layout. It does not require any scripts or need any complex setup.