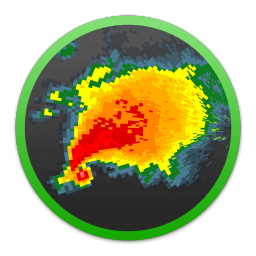 RadarScope is a specialized display utility for weather enthusiasts and meteorologists that allows you to view NEXRAD Level 3 radar data and severe weather warnings. It can display the latest reflectivity, velocity, and other radar products from any NEXRAD radar site in the United States, Guam, or Puerto Rico. These aren't smoothed PNG or GIF images, this is real Level 3 radar data rendered in its original radial format for a high level of detail. Whether you are scanning reflectivity for a mesocyclone's tell-tale hook echo, trying to pinpoint the landfall of a hurricane's eye wall, or looking for small features like velocity couplets in the storm-relative radial-velocity product, RadarScope gives you the power to view true radial NEXRAD weather radar on your Mac.

weather
Information
Users of Guests are not allowed to comment this publication.