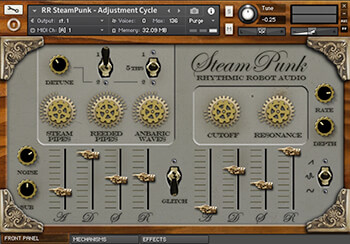 Across the grimy, smog-stained rooftops of the city, dodging between belching chimneypots and arcing Tesla coils, an evil genius in a clanking mechanical exoskeleton grimly pursues a dashing young woman whose only crime has been to dare to dream of becoming an aeronaut. Now, that dream will be crushed out of her in the dark, solitary confines of Newgate Gaol – unless, of course, she can reach her prototype gyrocopter in time.

ALT-VICTORIAN GOTHIC EXCESS
Drawing its inspiration from alternative universes and alt-Victorian gothic excesses (with a bit of H G Wells thrown in for good measure), SteamPunk is a Frankenstinian mashup of barrel organ, steam machine and electrical synthesiser – the perfect instrument for serenading the night-ghouls of Paris as you drift safely above them in the gondola of your hot-air balloon. Or something like that. However you choose to use it, it sounds pretty cool.

SteamPunk is based around three sound engines: the Steam Pipes are wooden organ-style pipes with a breathy, flutey presence; the Reeded Pipes are sourced from our 37-note Suzuki Melodica, and introduce a buzzier and more harmonically dense tonality; while the Anbaric Waves access a crusty, electrically-generated set of oscillators driven through malfunctioning paper-cone speakers and prone to overload and breakup. In addition, Sub and Noise waves can be welded into the mix to broaden the sonic palette still further.

KONTAKT
Information
Users of Guests are not allowed to comment this publication.