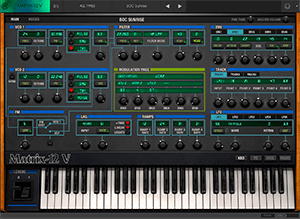 The massively powerful Oberheim Matrix-12 has been resurrected at last. Using our TAE modeling technology, we are able to recapture this beast of a synthesizer and bring it to you. The Matrix 12 was the first programmable analog synthesizer that took the best features of a preset voice path and modular flexibility. This bold combination made it a force of nature and something that had not been seen before. It also had a 15 mode filter system that enabled it to have sounds that had never been heard before.

So to establish the proper foundation, we perfectly recreated the tonal characteristics of the original 2 oscillators and their waveforms in Matrix-12 V. And it was equally critical to capture every nuance of its 15 filter modes, so we kept at it until they had been modeled perfectly! Another factor in defining the complex sound of the Matrix-12 was the amazing number of modulation sources and destinations it provided. This was a level of sophistication previously only available in a fully modular system. So to complete the emulation we modeled these capabilities also, even surpassing them. With a nearly endless number of possible modulation routings in Matrix-12 V you can create sounds with highly organic qualities not found in other synthesizers.

audio music
Information
Users of Guests are not allowed to comment this publication.