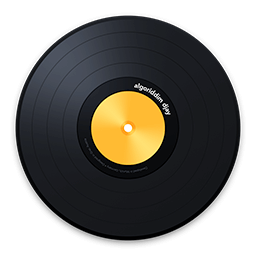 djay Pro provides a complete toolkit for performing DJs. Its unique modern interface is built around a sophisticated integration with iTunes and Spotify, giving you instant access to millions of tracks. Pristine sound quality and a powerful set of features including high-definition waveforms, four decks, audio effects, and hardware integration give you endless creative flexibility to take your sets to new heights.

At the heart of djay Pro is an innovative, modern user interface that provides flexible layers of functionality alongside a powerful music library into a single window interface.
It combines djay’s Apple Design Award winning turntable view that renders true record grooves on the virtual vinyl with more advanced modes including horizontal and vertical colored waveforms, live sampler and drum pads, FX racks, as well as a powerful four deck view that allows DJs to play, mix and synchronize up to four tracks simultaneously.

Instant access to over 20 million songs
The all-new music library in djay Pro enables you to seamlessly combine Spotify tracks from the cloud along with your local iTunes tracks into a single library. This provides unprecedented flexibility for song selection no matter where your music is located.

Spotify
djay Pro is the first professional DJ software that integrates with Spotify, giving you instant access to millions of tracks. Spotify integration in djay includes all of your existing playlists, starred and saved songs, powerful search capabilities, charts, browse, and Match for intelligent song recommendations.

iTunes
The music library in djay Pro provides a sophisticated integration with iTunes. You can browse your music library by Playlist, Artist, Album, Genre, Key, History, and more. The powerful inline search allows you to efficiently find tracks and simultaneously browse your library.

Match
Match, powered by The Echo Nest’s analysis of all the music on Spotify, is an innovative, first-of-its-kind feature which recommends tracks that go well with what you are currently playing. It helps you discover new music that matches your musical taste and style.

Loops and Cue Points
djay Pro offers you a range of advanced DJ tools. Manually set loop in and out points, use Auto-Loop to continuously loop part of a song, or remix live using Bounce-Loop, all in perfect sync with the beat. Multiple Cue Points allow you to set and jump to markers within the waveform.

Recording
djay Pro allows you to capture the mixed output in real-time so you can share it with the rest of the world. Recordings are saved as a high-quality WAV file or in compressed format. The built-in recordings panel allows you to preview, save, and export your files to iTunes.

Key Matching
djay Pro automatically detects a song’s key and allows to match it to songs of the same key within your music library. It allows you transpose songs into different keys, and sort your entire music library by key, perfect for creating studio quality mixes.

Sampler
The all-new built-in sampler adds another layer of creativity that allows you to trigger sounds and create drum beats on top of your music. In addition to the extensive pre-bundled content ranging from “Sound FX” to “Dubstep”, you can sample from your local tracks in real-time to create and save your own sample banks that can be quickly loaded during a performance.

MIDI Control
djay Pro integrates seamlessly with existing professional DJ hardware. In addition to supporting over 50 MIDI controllers by Pioneer, Numark, Reloop, and other manufacturers out of the box, djay Pro also includes an advanced MIDI Learn system. It enables you to map each hardware control on your device to individual actions in djay Pro and customize your setup to match your style and performance needs.

Version 2.2.3:Version 2.1:
We’re excited to introduce a major update, free to all existing djay Pro 2 users. You can now access SoundCloud’s extensive music catalog to discover and mix millions of underground and premium tracks. TIDAL integration in djay Pro offers HiFi sound, millions of tracks, and for the first time you can stream and mix MUSIC VIDEOS from TIDAL, right from within djay Pro! And using Ableton Link you can now seamlessly sync the beats of djay Pro running on your Mac with djay running on an iOS device.