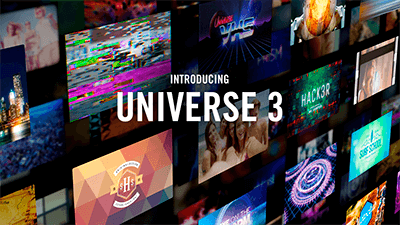 Transitions & Effects
Build fast, unique transitions with little or no work. Add glows and other effects that give you better results and more shortcuts, options and control than anything in your host app.

Presets
Every tool in Universe includes presets to help get you started and give instant professional results.

The Universe 3.0 release introduces our new Universe Dashboard for browsing and applying effects and presets, 5 brand-new text generation tools, and presets for every plug-in, to help get you started.

Dashboard
Working with Universe in Premiere Pro and After Effects has never been easier. The new dockable Universe Dashboard brings all of the Universe tools into one place, making it simple to explore and apply the entire library of effects and presets.

Tools
Universe is a collection of 79 GPU-accelerated plugins for editors and motion graphics artists.