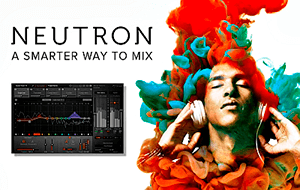 Achieve a clear, well-balanced mix with Neutron’s innovative new mixing and analysis tools. Control every aspect of your music, from the visual soundstage of your tracks to the tonal balance of your mix—all with iZotope’s award-winning digital signal processing.

Tonal Balance Control
The new Tonal Balance Control plug-in introduces industry-first visual analysis and communicates with all instances of Neutron so you can shape a perfectly balanced mix. Instantly call up any Neutron EQ and adjust your tracks to targets based on hundreds of professional mixes. You can even create your own custom targets from one or more songs in your personal library.

Visual Mixer
The new Visual Mixer creates a picture of the entire soundstage, giving you control over individual tracks and enabling you to quickly and intuitively set the contour of your mix—all without leaving the window. Control the pan, gain, and width inside of Neutron so your mix sounds exactly how you intended.

Masking Meter
An industry first, Neutron's Masking Meter allows you to visually identify perceptual frequency collisions, which can result in guitars masking lead vocals, bass covering up drums, and other issues that can cause a "muddy" or overly crowded mix. Toggle seamlessly between any two tracks to carve out sonic space and ensure that each instrument has its own place to shine

Improved Track Assistant
Another industry first, Neutron’s updated Track Assistant lets you create a custom starting point based on your audio so you can focus on what’s most important—your creative take on the mix. In version two, we’ve made improvements including the ability to set auto-release, ratio and attack on the Compressor, piano instrument detection based on machine learning, and more.

audo, music
Information
Users of Guests are not allowed to comment this publication.