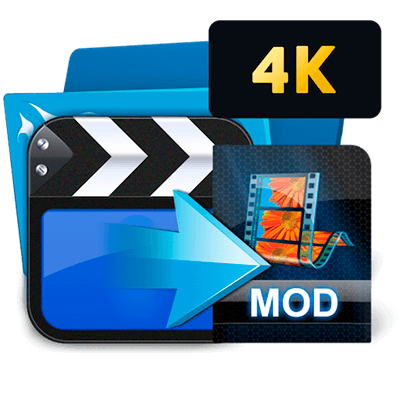 AnyMP4 MOD Converter can convert MOD to any popular video format like MP4, MOV, M4V, MPEG, AVI, WMV, FLV, WebM and more. With this powerful and professional MOD Converter App, you can convert MOD and other HD/4K videos and general videos like MTS, M2TS, TS, TRP, MP4, 3GP, MOV, M4V, MKV, AVI, WMV, OGM, WTV, DVR-MS, and Bink video to any your needed video format with unparalleled converting speed. Thus you can enjoy the converted videos on any portable devices like iPhone, iPad, and iPod. Besides, you can extract the audio file from videos and convert them to MP3, AAC, AIFF, ALAC, WAV and M4A, etc.

2. Customize video to be perfect
* Multiple video editing functions to choose
This MOD Converter has multiple editing functions to edit the video. You can adjust the video effect (Brightness, Saturation, Contrast, Hue and Volume); trim the video length; crop video frame to remove the black edges; rotate and flip the video; add text/image watermark; and merge multiples files into a new single one.
* Set output video and audio settings
With this App, you can not only modify video settings such as Encoder, Resolution, Video Britrate, Frame Rate and Aspect Ratio, but also audio settings like Encoder, Channels, Sample Rate and Audio Bitrate to get perfect video.

3. Support batch conversion and user-friendly
* Batch conversion
AnyMP4 MOD Converter can convert one or more source files to different formats at the same time. So you can get different output formats with only one conversion.
* Preview and snapshot
This App owns a built-in player to help you preview video effect. During previewing, you can capture favorite picture and save it as an image.